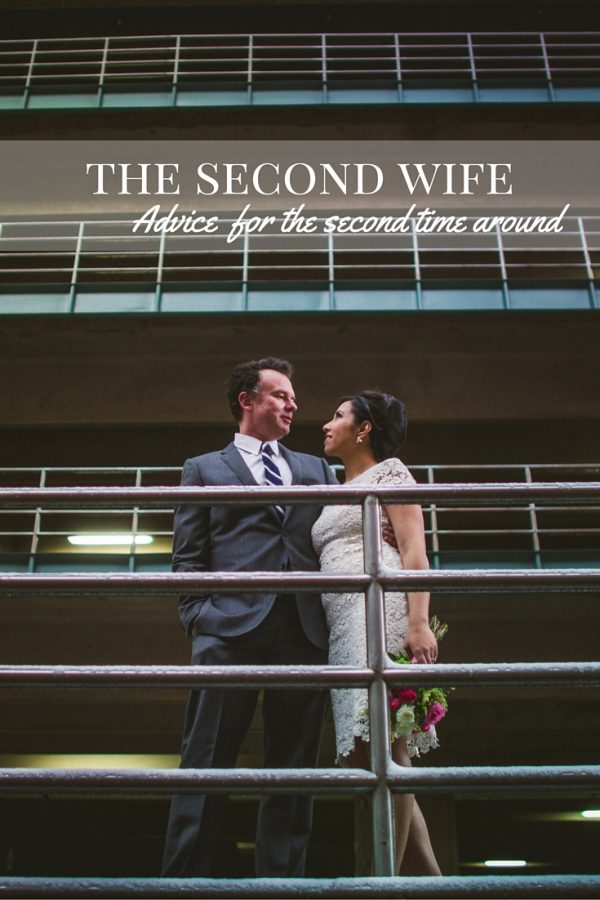 One in every four women you run into is a second wife. For many of us, the title “second wife” has negative connotations, as if the woman herself were a concubine or something. We imagine a 22-year-old bimbo, a succubus that snuck in and stole him away. Truthfully, we don’t know why a first marriage ended, so it’s really crappy of us to always assume that infidelity, abuse, or bimbos were involved. For the most part, second wives are identical to first wives. Women. The major distinguishing characteristic is that they might already be experienced mothers. Mothering does not a Succubus make.

At a second-grade parent-teacher conference, our daughter’s teacher told my ex-husband and I, “you guys are the best divorced parents ever. I mean it, you get the divorced parent award.” I don’t think my ex even heard her, but I was beaming with pride. The fact that she said that in front of our kids made it even more of a compliment to me. Teachers must really see the damaging effects of divorce on an intimate scale. I was so happy to know that the ex and I were doing it right, in a noticeable way.

David has an ex-wife, and my ex-husband has a new wife, so I have first and second wives all around me, as well as being one myself. As a divorced mom who has endured countless socially awkward situations simply by being divorced, I feel qualified to give a little guidance on how one might approach the second time on the matrimonial ride. Here are some tips from a woman who has been there, done that, and blended the kids flawlessly (*cough* mostly).

Just because it’s over doesn’t make it a joke

For many of us, the first marriage mattered. There was a day when you entered into that marriage with the same fervor and love as you do at the second wedding with the newly found love of your life. That marriage had a purpose and a role in your partner’s life, and if children were born from that union, that relationship becomes even more important. Take care not to belittle or degrade the first marriage to your partner. Don’t criticize them for marrying their ex in the first place. Instead of holding their past against them, honor what it was, and how it shaped the person that you now love.

Children mean you’ll be playing second fiddle to the first wife, a lot

When your partner’s ex is a rage-filled narcissist, there are moments when your partner seems to be giving in all the time. Perhaps to you it looks like she’s walking all over him, always getting her way. Obviously, this can be extremely difficult to watch. Not only do you agonize for your loved one, but you feel resentful and disrespected that they are always giving the ex so much attention, even negative attention.

See this for what it truly is; a man trying desperately to stop the drama. If that means coughing up yet more money, or giving in and taking the kids when you had already planned a date night, well, sometimes that’s just what needs to happen for your spouse to have some peace. Give your partner the gift of pleasant counsel. Recognize that when he makes minor sacrifices for her comfort, it most certainly is NOT about his secret lingering love for her. It’s about stopping the bitching, the abuse, the endless nagging and threats. Do your partner the greatest service by meeting him with love and acceptance when his ex is greeting him with manipulation and hate. Marriage is forever, even after divorce. Your partner may not love her, but he does love the kids.

The family you married into is important. If the first wife has decades of relationships with your spouse’s family under her belt, you are going to feel excluded. It’s just the facts. The Stoner Mom’s manners say that your new in-laws should never allow you to feel that way, but in-laws have a way of circumventing social graces. All one can really do is be pleasant, be transparent, and have an honest interest in your partner’s family. The only thing that will bring over a mean in-law is time.

See that High Road over there? Take it.

Your permanent job for the rest of your marriage is “the taker of the high road”. You are the one who must put emotions aside. You are the one that must model for the entire blended family, what this blended family thing is all about. That’s a big responsibility, and it can’t be muddied up with concerns about petty grievances. Watch what you’re modeling for the kids, and never stoop to the level of others who might offend you, even if they do so in front of the kids. You’re not a pushover, you’re a person with manners.

Never come into a marriage intending to replace a parent

The first person you will piss off will be the ex. Eventually even your partner will tire of your inappropriate machinations. Then finally the children themselves will come to resent you, likely at a later age when they are able to recognize that you played a significant part in distancing them from said parent. Except in cases of abuse, the step-parent’s role is to help nurture the children’s relationship with both of their parents. This is the key to a long-term relationship with your step children. The step-mother fills a very special role, but she is not the mother. She is the maternal figure in the father’s home. Model respect, graciousness, and availability to your step-kids and teach them that you value their relationships.

Your finances are heavily influenced by the first marriage

Take it from me, older men are hot. Hawt. They are better lovers, have bigger incomes, and know what they want in a woman. But, with an older man there is often the addition of… kids. Who may or may not be semi-close to your age. It happens.

After a divorce men are often broke. They’ve got half of what they used to have, plus will need to pay child support and alimony. All of this means that there will be less money for your household. If this kind of stuff annoys you, best to stay out of a second marriage with shared, dependent kids.

Self confidence is ESSENTIAL to becoming a happy second wife

You will be put on the back burner a thousand times, be faced with thousands of uncomfortable social scenarios. This isn’t a task for the weak. Men, take heed, if you marry a woman too immature for the role of second wife, you will very likely be saying “adios” to her next.

Second marriages are statistically doomed to fail. Second marriages take an immense amount of work, maturity, personal growth. Only someone who knows and understands their real worth on this planet will have a successful go with relationships. We can’t love anybody coming from a place of self-hatred. When we hate ourselves we choose the wrong match, time and time again. It’s only when we know who we are, what we are, that we can fully commit to becoming a couple with someone else. Fill your cup first. You shouldn’t need a new partner to make you whole. You are whole.

First of all, a suitor who treats their ex poorly is the mother of all red flags. Abusing anyone/anything is never okay. Friend or foe, ex-wife, stranger, animals. Verbal, physical or psychological. It is never, ever, acceptable to abuse others, so when you see it, recognize it for what it is. A sign of something very toxic and unwell.

When parents do not get along, children feel that they must choose sides, no matter what you have told them. I’m not saying you should defend your partners ex when they are an absolute ass, but do be a calming force for your partner when their ex has them embroiled in animosity. The priority should always be “lets figure out a way to end this conflict”.

Except for extreme cases, teach a child to honor and respect their birth parents

There are abusers that may not deserve that respect, but I am not addressing them.

Never, ever, EVER, talk mess about a child’s parent to them. It is so rude, and terribly disrespectful to everyone involved. There is nothing more awful than an adult manipulating a child, and if you are a parent or a step-parent, trying to influence how the child feels about their bio parent is unacceptable. Children deserve a relationship with their birth parent; toxic, shitty, painful or not. Every person should have the right to know where and from who they came from.

Also, allow your children to talk freely about their other household. Some adults are so uncomfortable with themselves that they demand their child never talk about them to their other parent.

Figure out an elevator speech and use it!

The first few times my ex-husband and I had to do social school functions together… it was rough. Awkward for every one involved, and it’s not like a school for the gifted draws a particularly sophisticated crowd. If you do what you’re supposed to do, and are able to function around your ex in an amicable fashion, people start to assume you guys are married. Enter that wonderful moment when you have to reintroduce yourself as someone who has failed in marriage.

It takes awhile to figure out the words, and you never really think about it until the moment comes. So. Do everybody a favor and practice some different phrases that communicate gracefully, that this is the respected parent of the child, but not your spouse. This go-to phrase will be a life saver at many school functions.

Realize that some people will never forgive you for pursuing happiness

And guess what? They don’t need to. The sooner you learn to not care about what others think about you, the better off you will be

Choosing personal happiness over social convention is scary. It’s not just scary for you, but scary to outsiders, who may feel threatened and offended by how proactive you are.The extreme actions of others cause us to reflect on ourselves, so if we’re talking about someone standing on shaky marital ground, your sudden epiphany in life might be extremely distressing for them. Let the person go. Let them wallow in their disapproval and hope that some day they too will reach a level of personal happiness where they no longer feel the need to hatefully judge others.

It really can be better the second time around

There are so many reasons I am happier in my second marriage then in my first, and almost 0% of them have to do with my ex-husband. When I chose David it was for only the reasons that mattered. It wasn’t influenced by what our families wanted, or how long we had been dating, or some imaginary countdown. It wasn’t measured by the opulence of our wedding or bound by children we shared responsibility for. It was about the way this man made me feel about myself, about the world, about what was possible. It was about him wanting me so badly he was willing to do this legally binding thing, all over again. Second marriages are about a second chance at love, and with all of the wisdom you gained from the first one, the second marriage can truly be the last marriage.

GrowCast Episode 11: How to Make Hash